Now, Mini doesn’t mean that you’re going to get less of the awesome action, or fewer randomly generated levels, or a smaller number of weapon crafting possibilities; it just means that we had to squish the files down to size and rework the controls to better fit the smaller screen size of a phone. Check out the screen below to see what I mean.

We’ve also heard the cries of our iPad players who want to see House of the Lost include directional shooting! This means that instead of lining up your character with the left-hand stick and then hitting the fire button to attack you can now attack in any direction (up, down, left, or right) depending on where you tap the attack button. 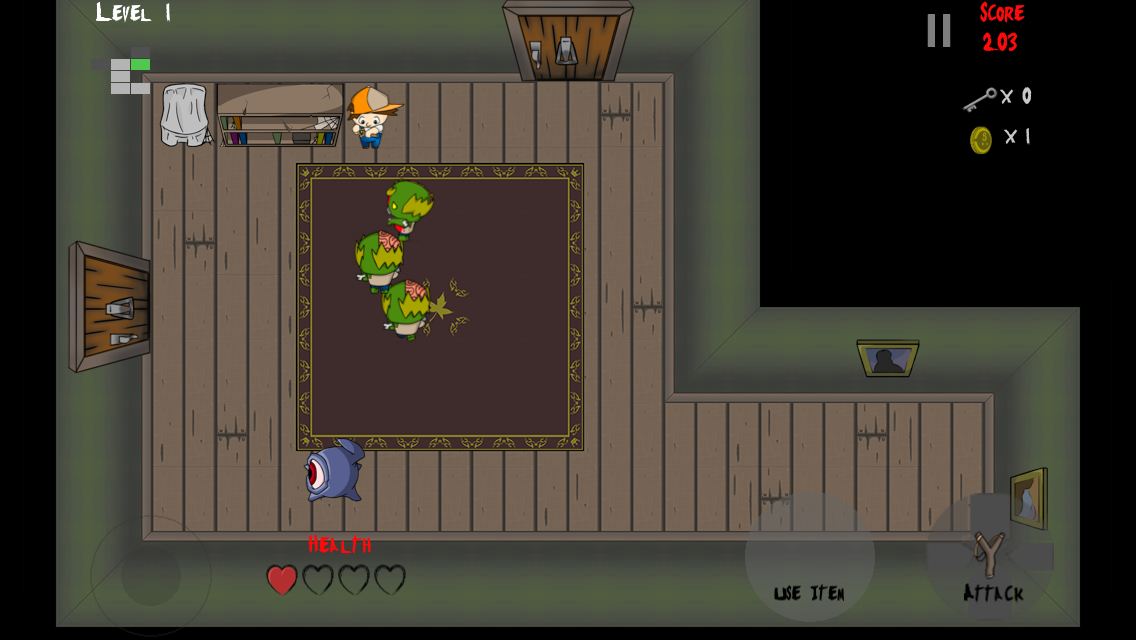 This is something that we’ve only added in the last week or so and I have a feeling that we’re going to need to continue tweaking it in the weeks ahead, so for now it is not the default control option, but you can turn it on from the settings screen. If you’re one of the players who have been asking for this please let us know what you think about it and how we should continue to improve it. We’ve still got a few graphics to swap out ( including the d-pad image in these pictures ) before we submit to Apple but you can expect House of the Lost Mini to be available in the next few weeks. Let me know what you think in the comments, and if you have any questions about the game shoot those over as well.

Also, check out this sweet stop-motion promo trailer that we put together to celebrate the launch

As I stated in our last post, you’ll still get all the awesome roguelike action gameplay of House of the Lost that made the iPad version so great AND you get the brand new d-pad shooting control scheme! So go grab it from the app store and let me know what you think in the comments!

We've been hinting at it for awhile but now I'm happy to officially announce that we will be launching House of the Lost for OUYA this month! Let's be clear though, this isn't just some port to a new platform, this is absolutely the best edition of the game. Not only is this the most up-to-date version of the game from iOS and Android but this version includes a few new features that you can only get on OUYA, physical controllers and a new couch co-op mode!

House of the Lost is an action/adventure game that challenges the player to survive a constantly changing haunted house while trying to save his sister. It plays similar to the dungeons in the original Legend of Zelda, or the more recent PC game Binding of Issac. You move from room to room fighting monsters, solving puzzles, and uncovering secrets on your way to a showdown with that level's boss. Along the way you will grow stronger, craft new weapons, and learn the secrets of the House, but if you fail you'll have to start back at the beginning. Also, each time you start over the house randomizes itself, changing the layout of its levels, placement of its monsters, and location of items and power-ups. All of this combines to give House of the Lost a real old-school challenge, and we are really excited to bring it to OUYA.

You can check out more screenshots and video of the game in action on our game page right here. 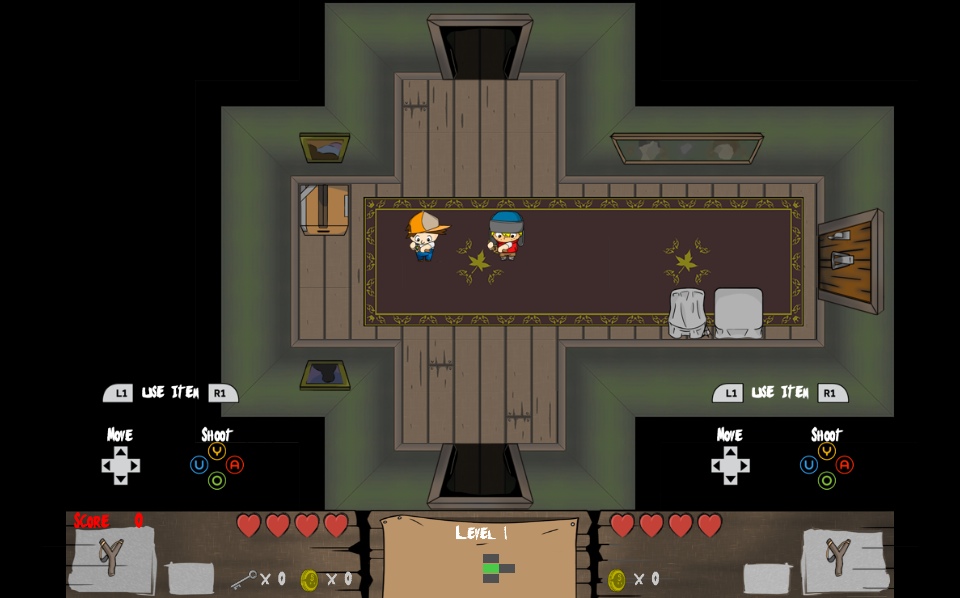 One of the biggest enhancements for the OUYA version of House of the Lost is support for the OUYA controller. You can now play House of the Lost with an actual controller in your hands, and it is a thing of beauty. Since the initial launch you have been asking us to refine the controls and we've made big improvements to how the game plays based on your feedback. However, none of those tweaks could make up for the fact that this game just needs to be played with an actual controller, and as soon as you get your hands on it I think you'll agree.
Our control setup for the game uses the left analog stick or d-pad to control your movement and the four face buttons ( O, U, Y, A ) give you directional fire independent of your movement. This allows you to move in one direction and then use the face buttons to fire in any other direction as you move. We've also mapped both analog triggers to item activation so you can use whichever one feels most natural to you.

House of the Lost has never controlled better than it does in this version, you've got to get your hands on it. 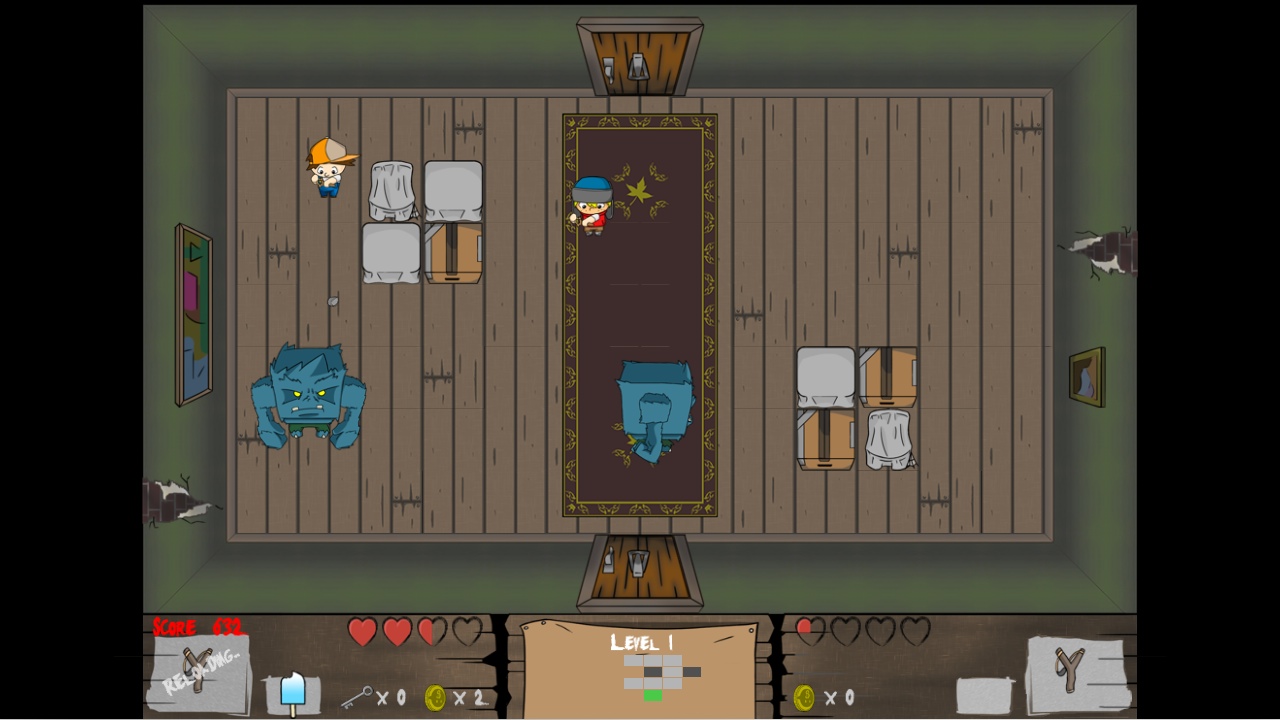 While the addition of physical controls has a huge impact on how you play the game our other massive addition could possibly be an even bigger deal, Couch Co-op! From the moment we got our hands on our Kickstarter OUYA console we've felt that it's best when you're playing together with a friend. OUYA is THE co-op console and we knew that we had to adapt House of the Lost to support co-op if we were going to do an OUYA release. We're very happy to say that adding a co-op mode was the best decision we could have possibly made.

In co-op mode you and a friend get to team up to defeat the House and rescue all the children trapped inside. Because the game is room based both players get to share the full game screen, there is no need to split the screen and limit your view on the action. Also, just because there are two of you now doesn't mean that things will be easy. Not only have we upped the difficulty on the enemies in co-op but we also have friendly fire turned on so you're going to need to be on your toes if you want to survive.

One area of the game that co-op really affected was our concept of permadeath. In House of the Lost you only get one chance to defeat the house and escape, if you die along the way you become a 'Lost Soul' and have to restart your journey from the beginning. When we started working to add a second player to the mix we realized that there was an interesting way to allow you to work around this issue and we decided to create a way for one player to bring the other back into the game. When one of the players dies in co-op mode they will transform into a 'Lost Soul' and disappear into the house while the other player continues on with the quest. 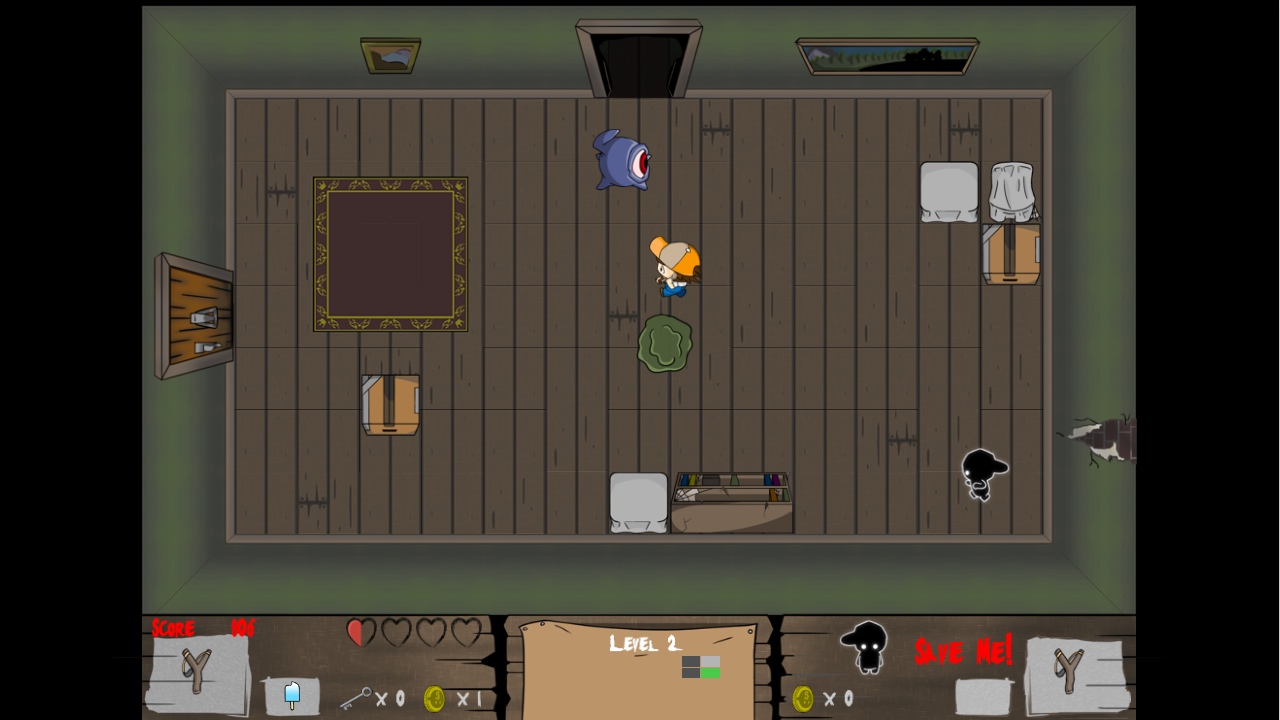 If you've played House of the Lost before you may know that you can find these 'Lost Souls' in different rooms of the house and if you save them they unlock secret shops where you can buy new weapons and items. In co-op mode, not only will you get access to the shop if you save a 'Lost Soul' but you'll also be able to bring your friend back into the game by saving them from the monsters. This makes seeking out the 'Lost Souls' even more important and really adds a new level of tension as you're trying to find a way to get your buddy back into the game.

In addition to what we've talked about today there are also a huge number of smaller changes and tweaks that have found their way into the OUYA version of House of the Lost. This has really been a labor of love for me over the last several months as I've been making these updates in my spare time while the rest of our team has moved on to other projects. All the hard work has payed off though, as I really feel like this version of the game brings back that feeling of a lazy summer afternoon playing SNES with my brothers. There is a certain kind of fun that you can only get when you're sitting in the same room and playing together on the same screen.

Today I'm happy to announce that, even before release, we've already updated House of the Lost for OUYA! Over the last couple weeks we've been refining and adding new features to the upcoming OUYA release and I want to quickly highlight a few of them today.

New Game Plus is an unlockable mode that allows you to continue playing a game after beating the final level, and now, House of the Lost has it! We've added a New Game Plus (NG+) mode to House of the Lost that allows you to keep your weapons, items, coins, and score from one play though and carry it over into another. This lets you continue to rack up high scores and gives you a better chance of crafting and permanently unlocking new weapon combinations. You'll need to watch out though, every enemy in the game gets more difficult in NG+ and their difficulty will continue to scale up even if you play through the game multiple times without dying. Although, I wouldn't bet on anyone being able to do that. 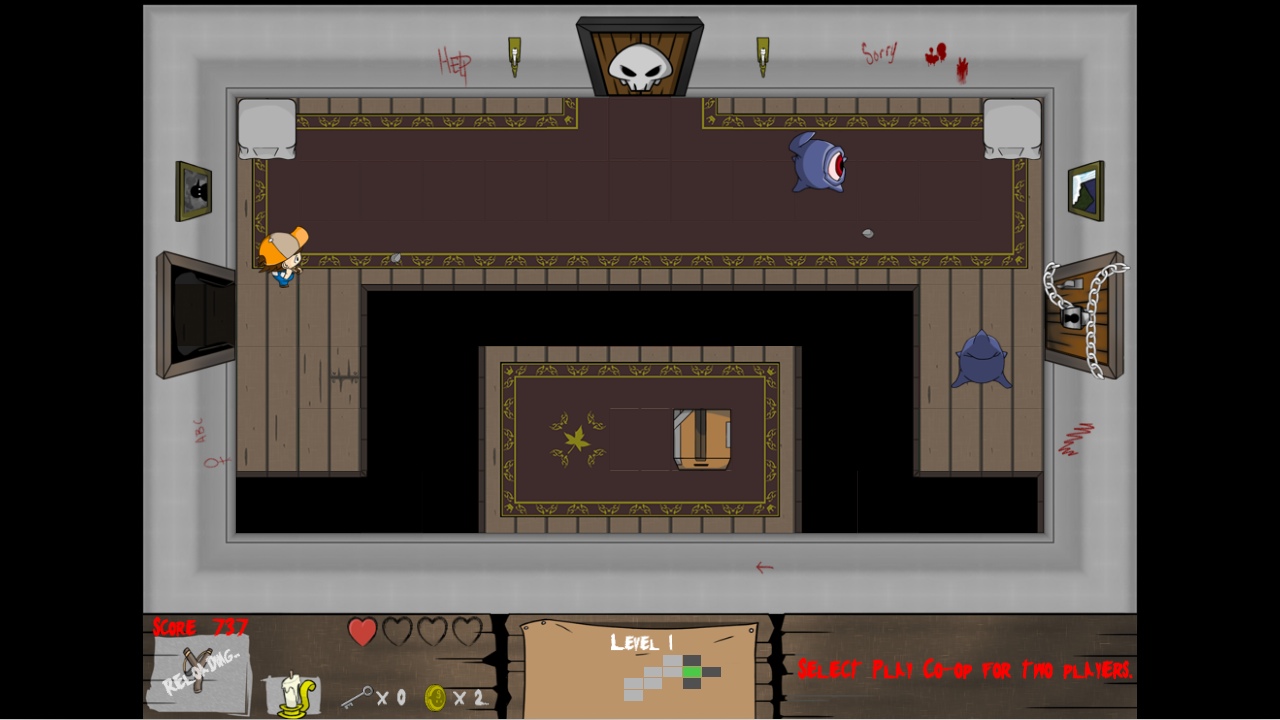 In addition to the NG+ game mode, we've also added new map layouts for the House that will continue to keep you guessing as you play through the game. Each of these new map layouts will have new puzzles, new enemy placements, and new secrets to discover so you'll have even more game to enjoy.

When is it coming out? 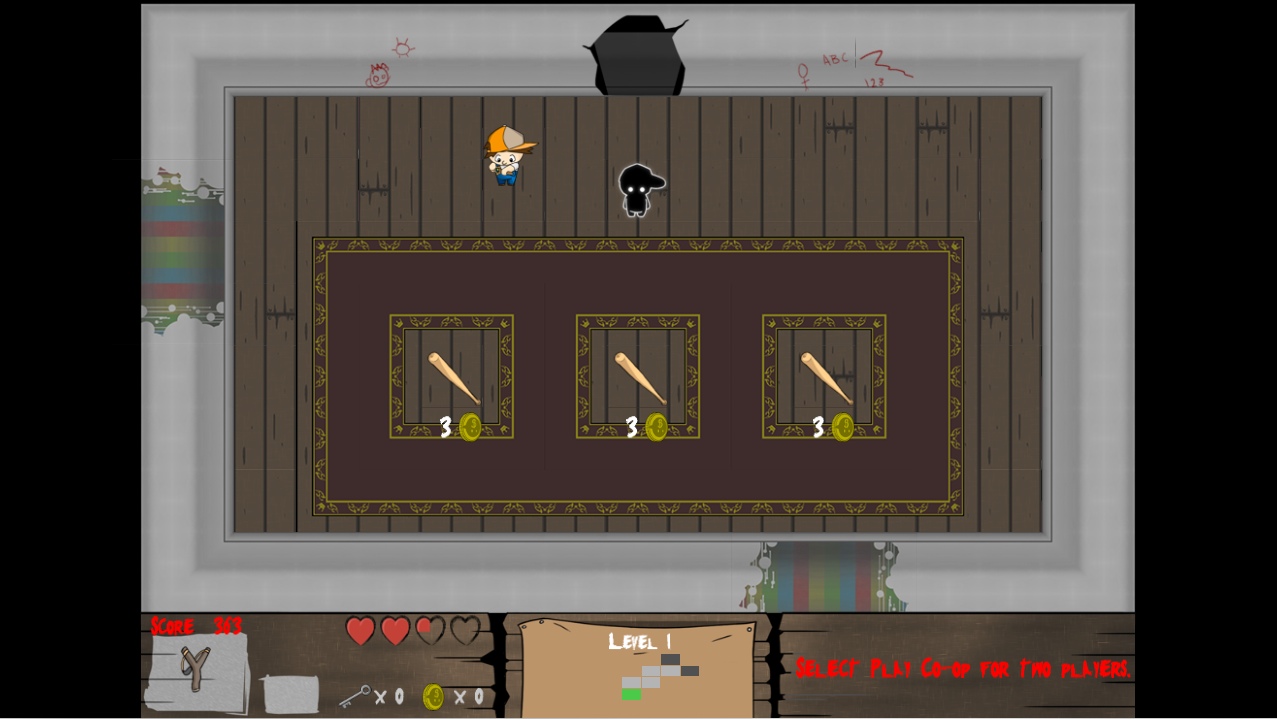 We're finishing up the release right now and expect House of the Lost to launch on OUYA next week! As soon as we're confident on the launch date we'll let you know for sure but go ahead and call your friends to set up a game night for next week. You're going to need the help.
House of the Lost
House of the Lost Launches on OUYA!

The day is finally here, House of the Lost is now available on OUYA!. After you watch our awesome launch trailer click on this link to hit our OUYA game page, where you can download the game directly to your OUYA no matter where you are right now!

Bringing House of the Lost to OUYA has been an incredibly long journey for us, and we are so excited to finally get to see it on the store. When we chipped in to the OUYA Kickstarter we were really hopeful that we were contributing to something that could change the way games are made, and made available to players. While I think that OUYA has had a few stumbles along the way they really have created a console that is welcoming and friendly to developers and players alike. Bringing together the open development standards seen on mobile and the living room/big screen/couch gaming aspect of the home console is a huge undertaking, but also something that is sorely needed in the industry right now. We're extremely proud to be a part of it! Now go play House of the Lost!

P.S. If you didn't already download the game to your OUYA you can do it now just by clicking this button!

House of the Lost
Find news about...
About Us
F5 Games is an independent game developer in Tulsa Oklahoma. We strive to create the very best in tablet and mobile games.