The first week of our Mario Maker Challenge has been completed! That means it's time for a review post that talks about the level design as well as what when wrong and what went right with it out in the wild.

Our first level was inspired by the awesome indie game Super Meat Boy. Super Meat Boy is a tough as nails platformer that countered it's insane difficulty with almost instant respawns and the incredible payoff of seeing all your failed attempts at a level when you finally completed it. The gameplay elements that stick out in my mind most about Super Meat Boy are one hit deaths, wall jumps, and spinning saw blades; so those are the elements I built my first level around.

If you haven't played Super Mario Boy yet, and you want to give it a shot before I dissect it, you can click this link to check out the Mario Maker Bookmark page for the level or you can use the code in the image below to find it in Course World.

One of my goals for the level was to make it challenging, just like Super Meat Boy, but honestly I may have taken it a little too far. When I went back to record a play-through video last night it took me at least a dozen tries before I could get a clean run. While that is par for the course in a Super Meat Boy level it's probably not what the majority of Mario Maker players are looking for if they run into this level during a 100 Mario Challenge. Check out my clean play-through below and they we can discuss some of the design elements in the sections below.

Part of the extreme challenge in Super Meat Boy comes from the fact that it only takes one mistake to end your run. If I wanted to re-create that challenge in a Mario level it meant that I couldn't include power-ups of any kind. That means tiny Mario is the only Mario you get. The major threat in the level comes from the many Saw Blades placed in your path. While the placement of coins can help you understand where safe passage resides threading the needle can still be very difficult. 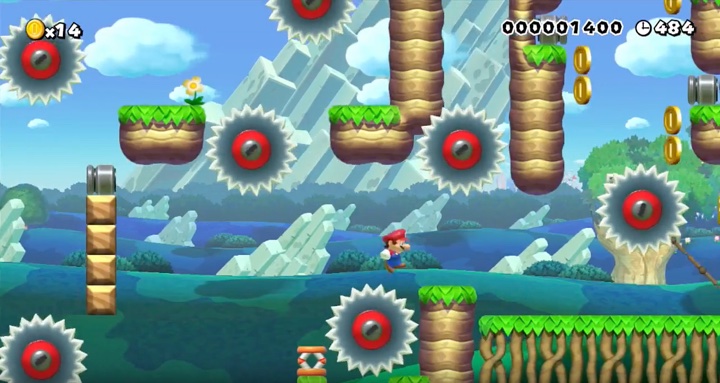 The other requirement for a Super Meat Boy homage was Wall Jumps, and wall jumping is only available in Mario Maker with the Super Mario U play style. My plan with the level was to initially give the player a stable area to comes to terms with wall jumping around the blades and then put them in situations where they had to use the wall jump because there was no floor below them. As you progress through the level there are fewer and fewer safe areas to stand on and more and more instances that require precision wall jumps to make it through.

Another aspect of all my levels in this challenge is that I will place 3 1-Up mushrooms around the level as a collectable and added challenge. Since the challenge was already so high in this level I didn't go out of my way to hide them but the second 1-Up requires a very precise wall jump to reach.

The level stats reflect that I've built a very challenging level. With only around 1% of players able to complete it, and most of the deaths occurring in the first screen, I have really limited the number of people that can play and enjoy the level all the way through to the end.

I have thought about going back and tuning some of the elements in the level since I uploaded it. There are a few small changes I could make to the opening of the level that I think would greatly increase the number of people who can make it into the level's second half. For now though, I think I'm going to leave it as is. I want to be able to track my progress during this challenge by going back and playing my earlier work and if I'm constantly tweaking levels after they are uploaded it is likely to muddy the waters when you look at all the levels in relation to each other.

After reviewing the level I feel like I did a good job of capturing the play style of Super Meat Boy. I also feel that the difficulty is much too high. In the future I am going to try and do a better job of creating levels that can be completed by a much larger number of players and then use the 1-Ups and other collectables as a way to add a greater challenge for those that seek it out.

That's it for Week 1! I am already working on next week's level and it should be out on Course World this weekend. Because of the huge launch of Super Mario Run this week I'll be using that play style as my inspiration for Week 2.